When the BBC announced the first of 2,000 redundancies in late 2004, there were fears about the impact on morale.

The solution was to develop a new careers service aimed specifically at staff leaving the BBC, and a South West London training and development company was brought in to help.

In eight months Career Counselling Services (CCS) trained 50 people, many from Human Resources as career coaches at BBC sites throughout the UK, earning it a place in the finals of the National Training Awards 2006.

CCS employs six trainers and in the past 10 years has trained 1,500 HR people to use career coaching in their work.

Managing director/trainer Robert Nathan said: “The challenge was to improve BBC staff morale at a time of turmoil, to provide a tailored, efficient and high quality service for redundant staff, which would help them gain clarity about their career direction.”

CCS trained the career coaches in the skills needed to manage expectations, explore options, actively listen and know what kind of support to give. The two-day course was run in London, Scotland and Northern Ireland.

“Since everyone’s future in the BBC was uncertain, it was initially unclear how many coaches would be needed Given that some trainees might leave, the training would not be lost, as they would gain skills for their own development.”

In all, 650 BBC staff have registered for the career coaching service. Each person is entitled to two one-hour meetings.

“Some downsizing organisations do offer outplacement to senior staff. It is, however, unique to train a large number of staff to support their own colleagues at such times,” said Robert. “This bestowed on staff, not only career-relevant skills, but also self respect, by giving of themselves, at a time when it is easy to feel worthless.”

“What makes this initiative unique is that, given the massive uncertainty in the BBC, the fact that so many individuals availed themselves of the opportunity for training to help their colleagues, despite the uncertainty of their future, is surely a role model for other organisations.”

And Katharine Edwards, co-head of CareerLink Plus, BBC, said: “The fact that staff are getting a high quality service without vast amounts of money being spent is very much appreciated by BBC staff who have an acute awareness of these matters.” 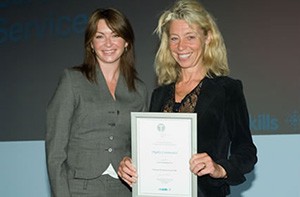 Gilly Freedman, Senior Career Coach at CCS, receiving the 2006 National Training Award from Suzi Perry at a ceremony at the Banqueting Hall, Whitehall on 10th October 2006.